First meeting with technical supervisor, Matthew Bett taken place today. The meeting was very productive and the outcome was excellent as the discussions fuelled ideas and probably a new direction for the project.

Previously, simpler lighting techniques were considered such as height based lighting, slope lighting and lightmapping algorithms. Currently, the consideration of rendering a High Definition Range Imaging (HDRI or just HDR for short) terrain/scene contained within a skybox is considered. Basically HDR renders a scene using  lighting calculation using a larger dynamic range as compared to traditional methods. This will greatly enhance the realism on the scene.

The challenge now is to consider how to handle materials in the scene which consists of mainly the terrain mesh. The terrain would also be largely static so that could be a challenge to bring out the HDR qualities. The idea of using a HDR Environment map as the light source and reflection map is being investigated at the moment as it is not sure how well it could be implemented in the application.

Below is an example of how HDR can greatly boost the realism of a computer generated scene : 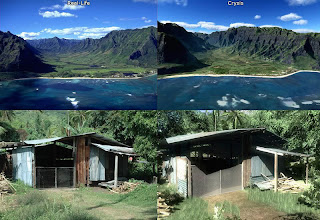 Example from the popular PC game Crysis
Complex 3D models won’t be featured (or will only be featured minimally) in the demo so most of the HDR lighting will be done on the terrain itself. At this stage it is not yet certain of the real time performance and also the chance of procedurally generating such a scene.
Soft Shadows – This is also considered to be implemented in the scene
Changing of primary light source position/direction and also consideration of auxillary light sources
This is yet another problem that has to be researched into.
There’s seems to be abundant techniques out there for photorealistic computer graphics rendering. The next aim is to pick out suitable ones for the research.

This site uses Akismet to reduce spam. Learn how your comment data is processed.